City officials in Gary, Indiana addressed safety concerns regarding four fatal shootings that happened earlier this week, announcing that the killings were not random acts of violence.

Four people – including two minors – were shot and killed within an approximate 24-hour period on October 2 and October 3, prompting concern from citizens.

On Sunday, the body of 50-year-old April King was discovered inside an abandoned house. A man with a head wound was found on the house’s front porch, leading police to believe the incident was an attempted murder-suicide.

Later that day, Arlandus Jackson, 37, was admitted to a local hospital with a gunshot wound. He was later pronounced dead.

Gary teens Dayvion Jones, 16, and Bobby Wright, 14, were shot and found unresponsive by authorities on Monday morning. Their deaths were ruled as homicides by the coroner’s office.

Although the recent deaths have shaken the small Indiana city, city officials say none of the crimes were random, nor were they related to drugs or gangs.

“We believe [the teens] were killed together at the same time. Officers have very good leads in this case,” Gary Police Chief Brian Evans said at a press conference on Tuesday.

“I want to say this is not Gary. This is certainly not who we are,” Prince told reporters.

“We do everything in our efforts to make sure that it’s a safe city, understanding that ‘safe’ is a matter of perspective,” the Democratic mayor added. 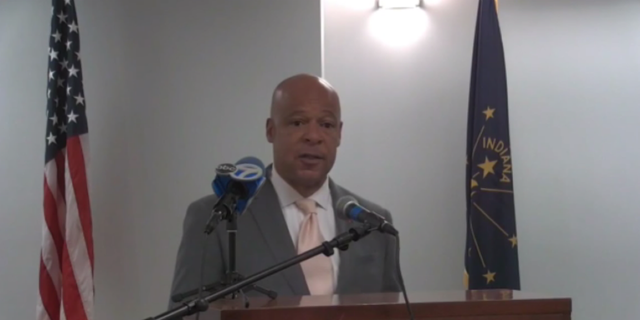 Gary Police Department and the Metro Homicide Division are investigating the murders, along with federal and local officials.

Authorities ask anyone with information to contact the Gary/Lake County Metro Homicide Unit at 219-755-3855.