A man was caught on surveillance video shooting at a pair of Phoenix police officers late last month after speaking to them outside a convenience store — but the officers in question are on leave and under investigation in the wake of cellphone video that shows one of them kicking the handcuffed suspect.

Phoenix authorities on Thursday released surveillance video showing the suspect shooting at two officers in a patrol vehicle just after he spoke to them outside a convenience store, Fox News said.

The officers were leaving the QuikTrip near 59th Avenue and Buckeye Road on Oct. 27, KTVK-TV reported, adding that the suspect was identified as 38-year-old Harry Denman.

As the officers entered the patrol vehicle, Denman continued to talk to them through the driver’s side window, police told KTVK. The officers told Denman they were on a call and had to leave, KPNX-TV said. 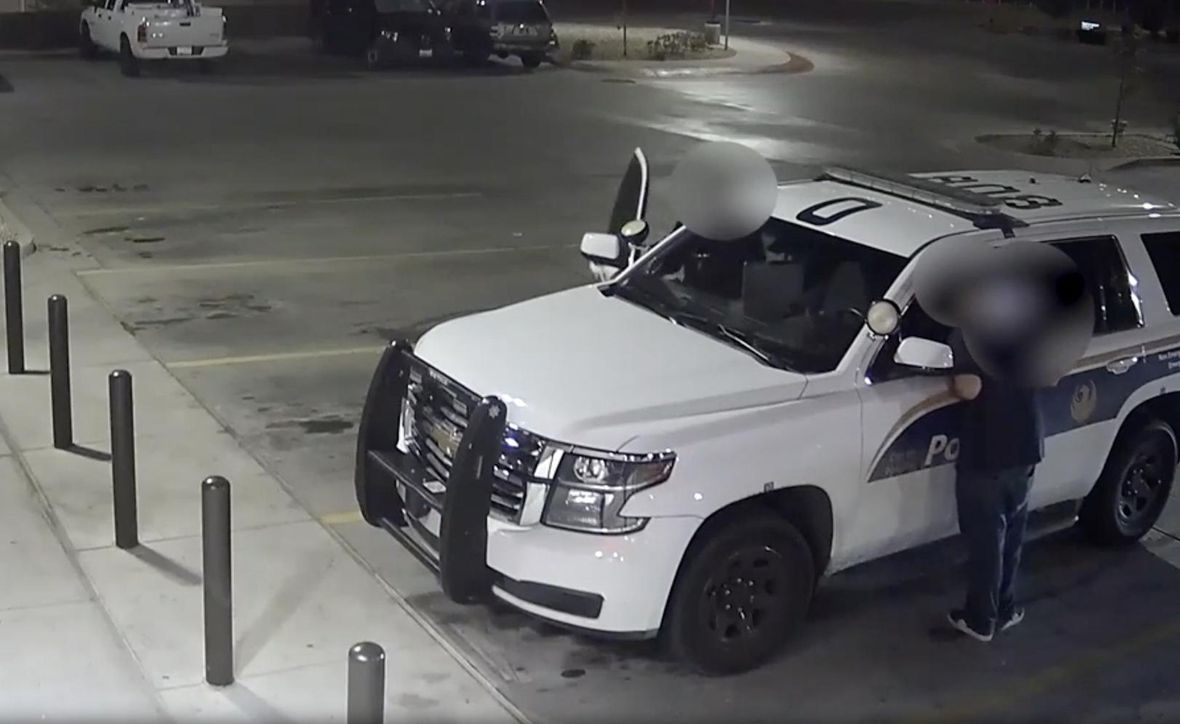 When the officers were pulling out of the parking lot, police said Denman fired two rounds from a handgun at the officers’ patrol vehicle, KPNX reported, adding that police said one bullet hit the ground and the second hit the patrol car’s spotlight. KTVK said the second bullet also entered the door frame. 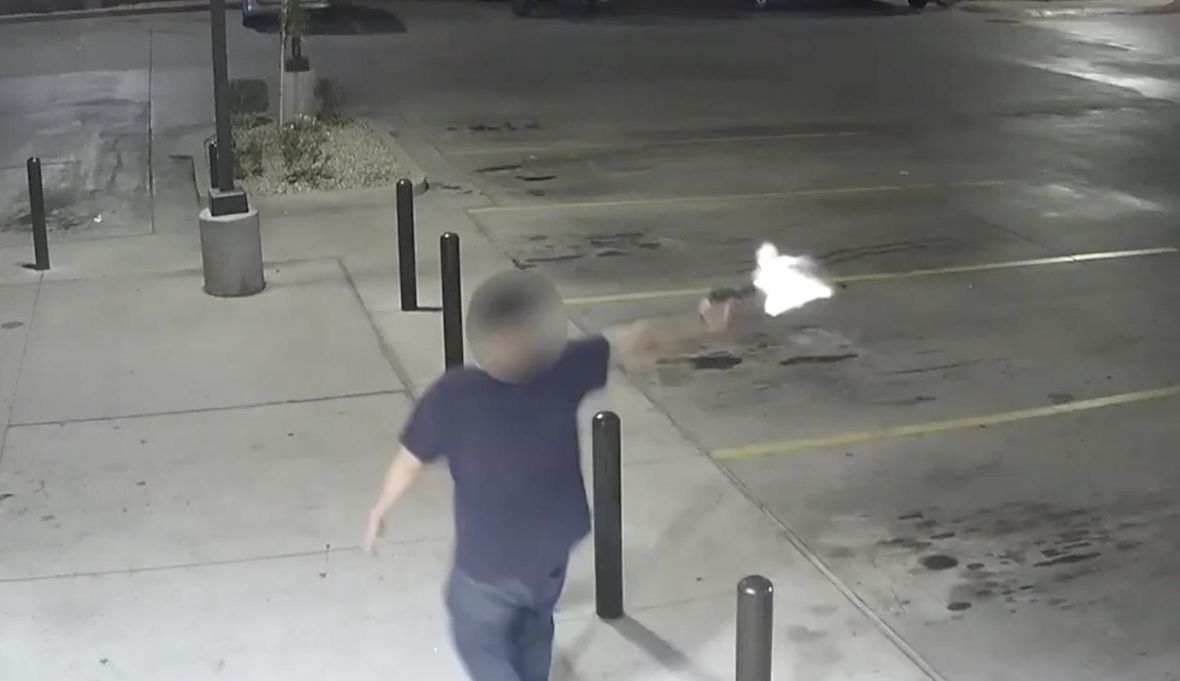 Documents obtained by KPNX claim a witness told investigators that the suspect fired the shots to get the officers’ attention for help.

Authorities on Thursday also released police bodycam videos showing the officers pursuing Denman into the convenience store with their weapons drawn and arresting him, KTVK said.

In one bodycam video, an officer is heard telling the suspect, “I will blow your [expletive deleted] head off … if you make any other” and then he stops speaking.

However, the most complete visual account of the arrest appears to be from a cellphone video, which Fox News said a store clerk recorded.

Prior to the officers handcuffing Denman, the cellphone video shows the suspect on his knees and the officers ordering him to get on the ground; they each kick him once in the head and ask him where his gun is. It’s later determined that the suspect put the gun on a shelf after entering the store. 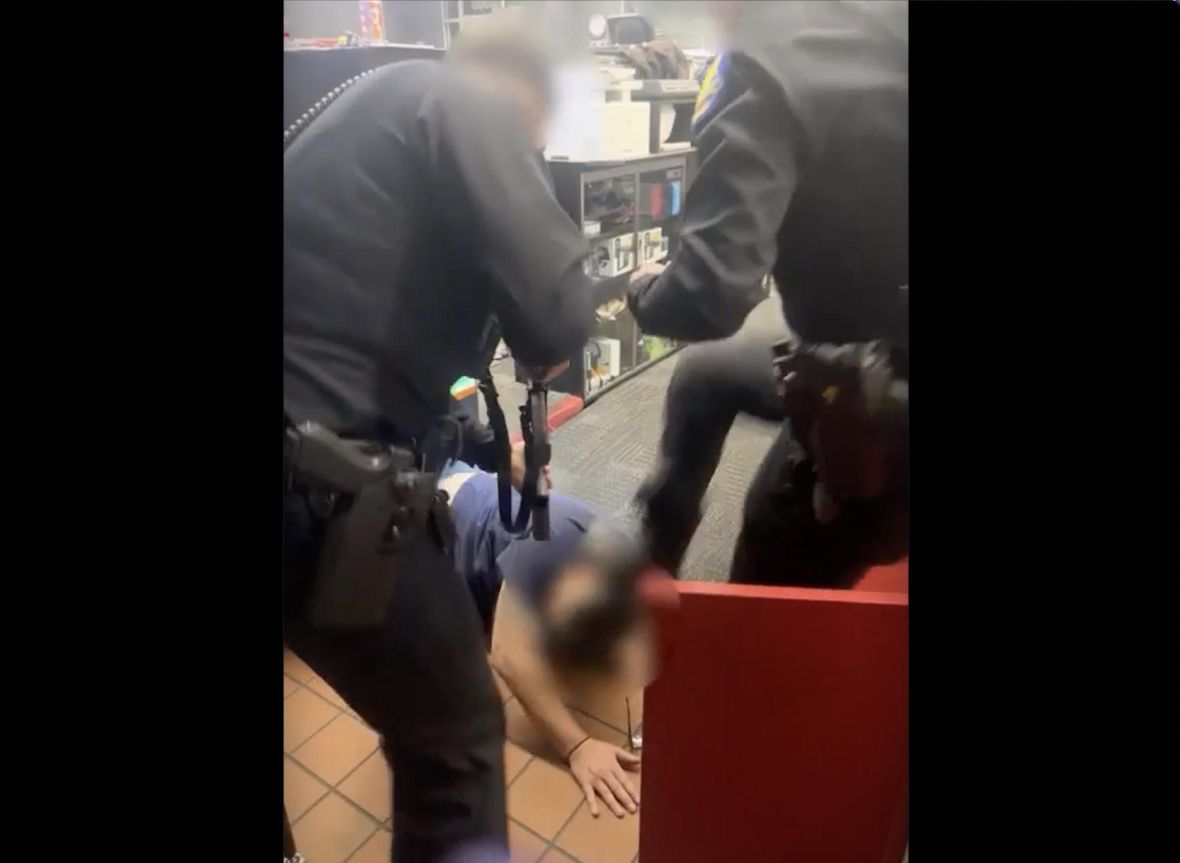 Both officers then hit Denman with their guns as they order him to give them his hands, and one of the officers soon handcuffs the suspect on the floor.

The cellphone video also shows one of the officers kicking the handcuffed suspect in the back while the suspect tries to move his body. That same officer then puts his knee on the suspect’s back. Spatters of blood are visible around the suspect’s head.

Soon the suspect begins to whimper and beg the police not to kill him, at which point the other officer yells at the suspect to “shut the [expletive deleted] up!” The officers then pull the suspect to his feet, and the officer who kicked the suspect in the back pokes him in the leg with a gun barrel as the suspect’s pockets are checked.

Here’s a compilation of the surveillance videos, bodycam videos, and the cellphone video:

What happened to the suspect?

Denman was taken to a hospital and then booked into jail on aggravated assault and weapons charges, KTVK said.

Denman has had other run-ins with the law over the years, according to a second story from KPNX-TV. The station, citing documents, said he used a fake $50 bill at a mall in 2007, and when an off-duty security officer tried to stop him, Denman pulled out a gun, pointed it at the officer, and said, “You think this is a game?” KPNX said Denman later pleaded guilty to two charges of aggravated assault.

What happened to the officers?

The two officers involved in Denman’s arrest last month — one with six years of service and the other with less than one year on the job — were placed on paid administrative leave, KTVK said. The police department is conducting an internal and criminal investigation into the officers’ actions, the station said.

“What is depicted in the video is not how we train and is not aligned with the core values of the Phoenix Police Department,” Sullivan said, according to KTVK.

According to KNXV-TV, Sullivan invited interim Maricopa County Attorney Rachel Mitchell to view the cellphone video of the arrest, the officers’ bodycam videos, and surveillance video.

Interestingly, Sullivan was sworn in the day after the shooting and arrest took place.

KTAR-TV said in a separate story that Sullivan, who has police reform experience, is expected to stay in his interim role between one and two years — which is how long a Department of Justice investigation into potential civil rights violations and abuses of power by the police department is expected to last.