Adrenaline and brute force could be enough to break down a door in some situations, even with poor technique. However, a little fundamental knowledge of breaching a door could go a long way, and subsequently be a lifesaver. “When one door closes, another opens,” says an oft-repeated adage.  But in a SHTF scenario involving a fire, attacker, natural disaster, WROL scenario, losing your keys, or all of the above (hopefully not), you may want some added insurance should the precept prove inaccurate.

Check out this guide for some tips and several different methods involving various types of equipment or lack thereof.

By the time you’ve read through this article, you’ll have a pretty good foundation that could have you plowing through doors like a pro.

At the least, it will save you from dislocating your shoulder. At the worst, you won’t wind up with your foot stuck clear through the middle of an entrance.

How To Break Down a Door with a Kick

The simplest method to break down a door is with a kick.

Why NOT Use Your Shoulder

You’ve probably seen people break through doors by ramming them with their shoulders in movies and TV shows.

While this could work for weaker interior doors it isn’t ideal for two reasons:

The first reason is the mechanical placement of one’s shoulder in relation to the door’s lock. In order for a locked door to be breached, the lock hardware must be forced through the surrounding jam.

This means you should be focusing the impact towards the vicinity of the doorknob. Your shoulder lands well above where a door’s locks are likely to be, so it will require far more force to break through than if it were applied in the correct location.

The second is that your shoulder is actually a very fragile point of your body. This is the reason why shoulder injuries are common even with relatively little physical trauma.

When it comes to your body’s joints, range of motion and stability tend to be a trade-off and your shoulder leans on the side of mobility. Shoulders aren’t designed to withstand a lot of direct impacts.

Your legs, on the other hand, are relatively well outfitted for the task. They have far more musculature than your arms and boast joints that are equipped for explosive force and constant load.

The quickest kick is a simple front kick that lands with your heel square above or next to the knob.
Don’t kick the middle of the door. Most modern doors are hollow inside except for a lightweight foam core.

At best, your kick will be less effective because you aren’t hitting the right spot. At worst, your foot will go through the middle of the door.

Another way to break down a door is to  try  a “mule kick.” This approach is borrowed from soldiers and SWAT teams who are entering hostile environments and therefore need to minimize the amount of time they spend directly in front of the door, where they are extremely vulnerable to shots from inside.

To perform a mule kick, stand next to the door with your back against the wall. Then kick backward with your heel landing just below the doorknob.

Tools Used to Break Down a Door

When it comes to doors that are heavier duty, like metal exterior entrances or intentionally hardened doors, it may take more than a little persuasion to get through.

In this case, or if you simply want to save wear and tear on your knees, there are a number of tools that can be employed for breaking down a door. They range from a simple crowbar to specialized tools made specifically for that purpose.

A common (albeit heavy) tool that can be found in just about any garage is the good ‘ole sledgehammer. As with kicking, the force is intended to break the lock through the jamb. Aim near the doorknob and bat away. If the lock doesn’t bust through the first time, rinse and repeat.

Depending on what’s available, you can improvise similar tools in place of a sledgehammer, such as the blunt side of an axe. Just make sure you watch where you’re swinging.

If striking the door isn’t making traction, another approach could involve prying.  The ubiquitous crowbar could be used to “gap” a stubborn door and make incremental progress for extremely difficult doors, like exterior or reinforced ones.

Wedge the crowbar’s fork in between the door and the jamb and crank away. If wedging the crowbar in the existing gap proves to be easier said than done, have a buddy hammer the other end of the bar to get a good purchase started.

Use the leverage you have to widen the gap, and then keep adjusting your angle to make continued progress. If the gap becomes too wide to pry but the door remains in place, you can use something as a spacer like the head of an ax, a brick or whatever else can fill the gap and get the crowbar flush against the jamb. 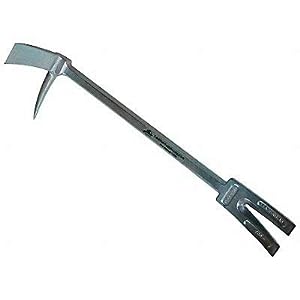 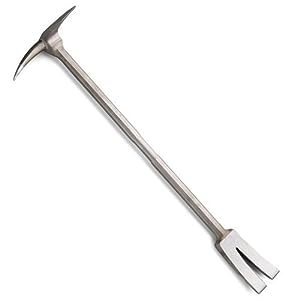 The door breaching capabilities of an ax and a crowbar are combined in the brilliantly-designed “Halligan Bar” developed by and utilized by firemen. It features one end with a ninety-degree adze and a spike (used for acquiring purchase on wood jambs to pry from) and a fork at the other end which resembles a crowbar.

This is one of the best tools around for opening a door. It is specially designed with that purpose in mind. It is also the result of decades of firefighting experience.

If you have one of these, you definitely deserve some kind of honorary preparedness badge from the Boy Scouts. But for most, you’ll probably have to settle for using a sledgehammer and/or axe.

Breaching a Door with a Shotgun

All this talk of sledgehammering, axing, and kicking could sound like a lot of work. For those who like to get the job done without breaking a sweat, perhaps a 12 gauge shotgun is more your style.

Soldiers are trained to breach doors with 12 gauges loaded with special cartridges made for that purpose. While most shotgun shells are filled with metal beads or slugs, breaching cartridges are filled with an iron powder that minimizes the risk of collateral damage.

Unfortunately, you probably don’t have these lying around, in which case, double ought buckshot will have to work. However, keep in mind that safety is not guaranteed. (Side note: if you thought safety was guaranteed at any point here, you’ve come to the wrong blog post.)

As with all of the other methods of breaching doors, you are aiming the attack at the locking mechanism. To do this, you’ll be angling the bore of the shotgun forty-five degrees downwards and forty-five degrees inwards towards the lock and jamb.

The idea is to hit the lock and not much of anything (or anyone) else. Because you can’t see through the door, it should go without saying that you don’t want to come anywhere close to shooting through it.

Double ought buck should make quick work of any normal door lock, jamb, and pretty much the surrounding few inches. Watch for splinters.

Let’s look at this from another perspective, as the homeowner. Home security is critical when SHTF, you want to be able to protect your family from people taking advantage of the chaos.

Do you think, after reading all of these tips, that you are safe with just a deadbolt? It’s better than nothing, but that won’t stop a professional thief.

Door Armor reinforces the weakest points of a door and door frame and makes it next to impossible for a thief to get in through the door. It will take a thief less than 10 seconds to kick in a standard door with a deadbolt.

Take advantage of the 15% OFF discount code for SHTFPreparedness followers! Use AFSHTF15 at checkout!

Now that you’ve kicked, smashed, pried, or shot your way through the door, this would be a great time to check that you’re at the right address. Or maybe that should have been the first step. 😉

Regardless, hopefully, these tips have given you enough knowledge so if find yourself in an SHTF situation, you won’t be relying on fate to open doors for you.