How to Make a Homemade Moisturizer for Dry Winter Skin

How To Use Duct Tape For Survival & Emergencies

9 Types of Axes for Survival

We have been using axes for 50,000 years! The oldest axe fragment was found in Australia in the 1990s. They are one of the most important tools in human history. There are many types of axes in our world today. What Is an Axe?

An axe is a handheld straight-edged cutting tool that uses swinging force to cut, chop, or split.

There is a certain kind of electricity that goes through you when you take up an axe and stand before a job. When you wield that axe standing before a pile of uncut firewood, you touch some raw wires inside you.

Axes are one of the rare tools that we adapted to kill with. We have fought wars with axes but we also keep axes in our shed for utilitarian uses. We don’t keep swords around for practical uses.

Much of this has to do with the wide variety of uses and types of axes.

Let’s take a look at a few different types of axes and what they can be used for.

These are the most common types of axes. They are designed to take big bites out of wood or chop down limbs. The felling axe is what most people think of when they consider an axe. This type of axe features a long broad blade and is built for bringing down trees. It is the classic single bit lumberjack axe.

A quality felling axe will feature a wood handle and razor-sharp wide blade. The axe head will be sizeable but easy to swing as a tree is rarely felled in one swing.

The felling axe can also be used to trim live trees by lopping off limbs with its effective blade. The Woodsman’s Axe is the little brother of the felling axe. While your felling axe features a longer handle of about 3 feet, the short woodsman’s axe can be as little as 18 inches and still be a very effective tool.

These axes are designed to dominate the bush as a multi-use tool that can cut wood, split wood, and even carve if you have the practice. It is by far the most effective axe to take on camping trips.

If you are dealing with firewood and fire pits you gotta have a woodsman’s axe.

A fighting axe or battle axe is designed for, well…fighting. These are the types of axes that would have been brought into battle over the ages. Axes are effective killing weapons as well as cutting tools! The Merovingian Dynasty of the 6th century was made up of a ruling family of Franks. One of their weapons in battle was the axe of the same name. This battle axe had a broad blade and slim axe head.

The Merovingian battle axe looked like a tomahawk in its design, compared to other battle-axes in different parts of the world. It was not really a menacing axe in the way something like a horseman’s axe would intimidate.

However, this axe was part of a great military campaign that ate up a large swath of Europe in its time. 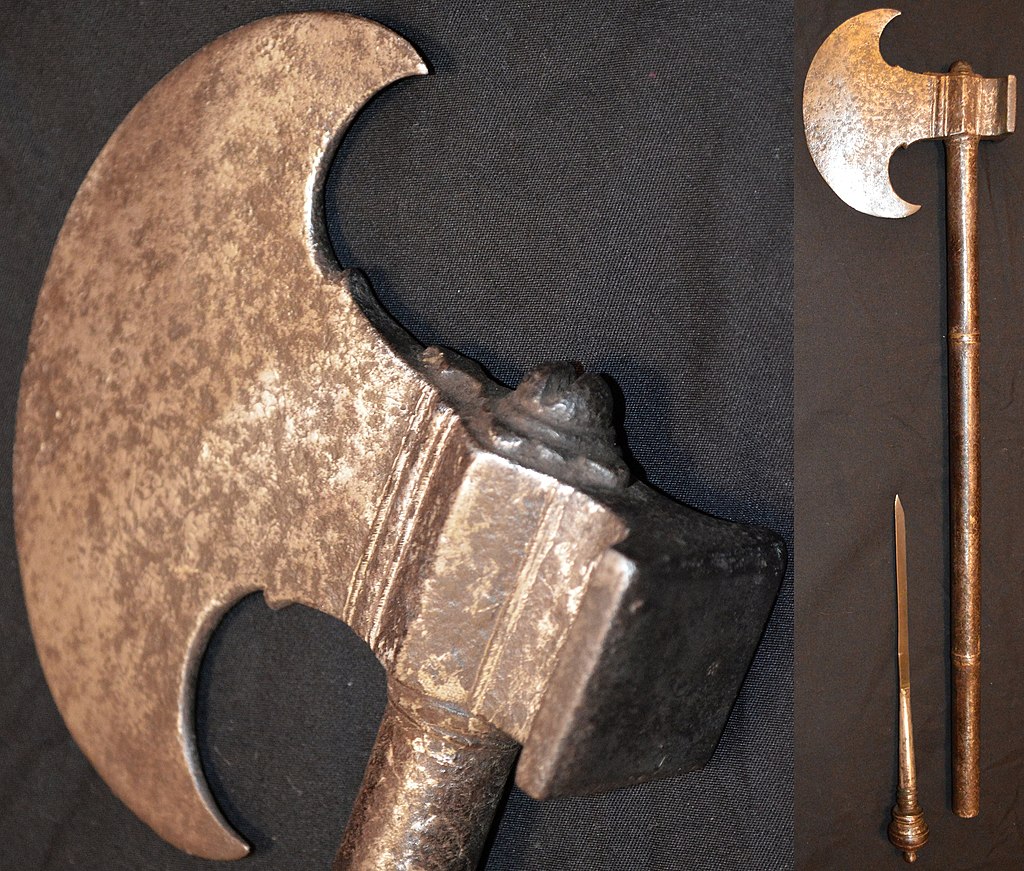 The Indian Tabarzin looked much more like a battle axe. With its pointed crescent design, it was the type of blade that could evoke fear. These axes were designed for the mounted warrior and were often called a saddle axe.

These blades were made in a few different designs but the most common were the dual crescents with the flat-backed axe head. 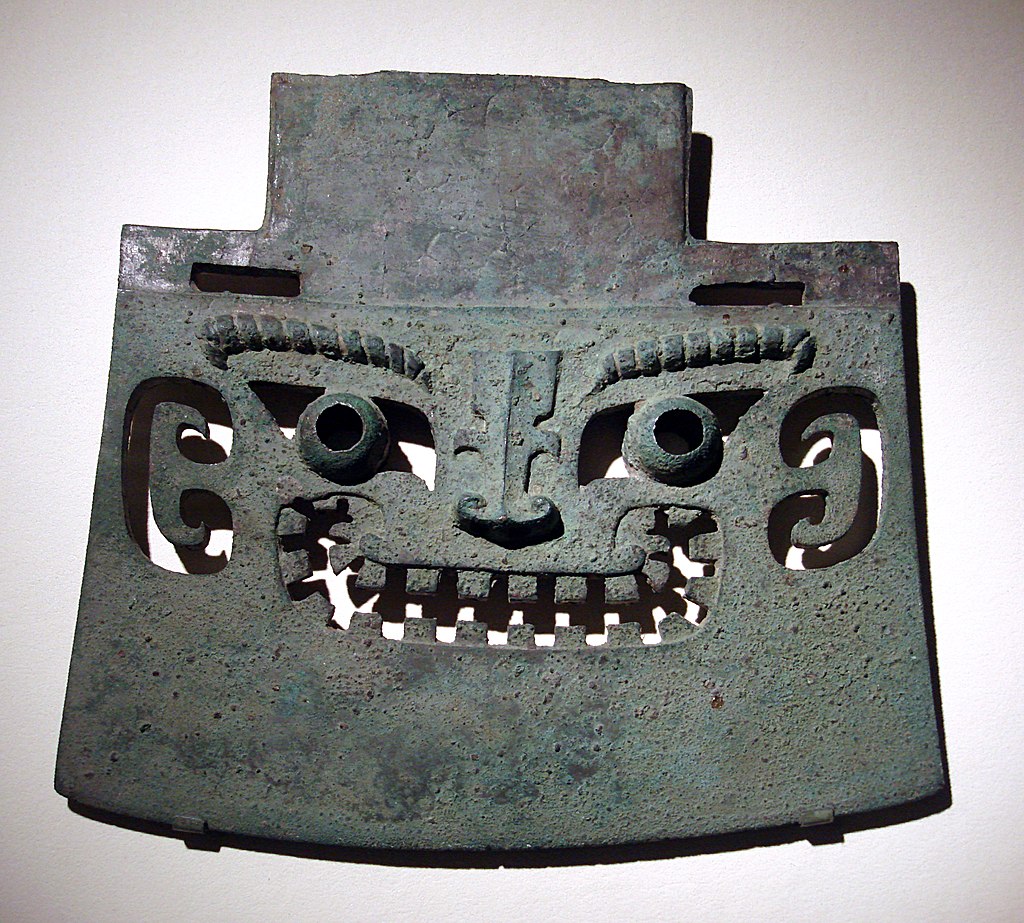 The Yue battle axe is very interesting because it comes from the bronze age. It is astounding to even imagine a bronze axe. The bronze Yue was not just a warfighting axe but was also used ceremoniously.

Because of the fact that the Yue was used in religious ceremonies, these could also have appeared in a decorative capacity hanging on walls or shelves.

There was also the popular “bronze axe” of the same time period, that would have been used as a tool and not for fighting or ceremonies.

The double-bit axe features cutting edge on both sides of the axe head. This can be a very dangerous axe to yield if you are inexperienced or weak. These are heavy axes that can be used for cutting or for splitting wood.

The double-bit axe is a thing of beauty and really looks like a tool designed for breaking the forest down! Council Tool makes one of the best double-bit axes on the market today!

While this is a rarely used axe in modern times it can be very effective if you learn how to wield it. There are many types of axes but the splitting maul has one of the most unique axe heads. The maul is more blocky and the edge is more of a wedge than a sharp cutting blade. This really is like having a wedged sledgehammer.

The weight of the maul and the wedge is designed to split large hardwood. A good maul and a pair of hands that can use it can break up giant rounds cut from mature hardwoods.

A splitting maul is an essential survival tool if you are going to be breaking down wood for any kind of fire.

There are some types of axes that are designed for a specific job. We will look at a couple of those axes in this section. The pickhead axe is a fireman’s axe. When you see the distinctive design of a pickhead axe you will quickly recognize it as just that. These tools are designed for getting through walls and doors.

There are some distinct survival advantages to having an axe that can breakdown walls and doors. This could be for escape or for quick scavenging.

Post-apocalyptic fantasy aside, the pickhead axe is a great tool!

The broadaxe was the sawmill of ancient times. Of the many types of axes that have passed through history, the broadaxe is one of the most incredible because it was literally designed to shape lumber!

From this axe we were able to change the way we built shelters and really start to imagine the modern-day buildings and building processes. It was not an easy process but the design and function of this axe made it all possible.

How Many Types of Axes Are There?

There are three main function-based distinctions between axes. These are (1) axes made for cutting and felling, (2) splitting axes, and (3) fighting axes. However, there are hundreds of different types of axes if you break them down by design, region, history, and makeup.

What Types of Axes Are Best for Cutting Down Trees?

A broadaxe or a felling axe are the most effective axes for cutting down trees. A long handle will create the leverage you need to cut down a tree. Second, a good 'bite' or broad, sharp blade will be required to cut the wood.

What Types of Axes Are Used for Throwing?

Hatchets or tomahawks are the most ideal throwing axes. You will want a small handle and axe head to throw it effectively at a distance. For instance, a double bit axe would be too heavy and dangerous to throw.

The axe has followed us into battle and into the woods for thousands of years. Across the globe, the technology of the axe has been manipulated and changed. We get to sort through all this evolution and choose the very best axe for us. Gear Guru for SHTFPreparedness.com and host of the I AM Liberty Show, James Walton is a freelance writer, speaker and personality in the survival and preparedness world. His book Come Unity; Community is about cohesion and disaster preparedness on a neighborhood level.

Permanent link to this article: https://www.shtfpreparedness.com/types-of-axes/